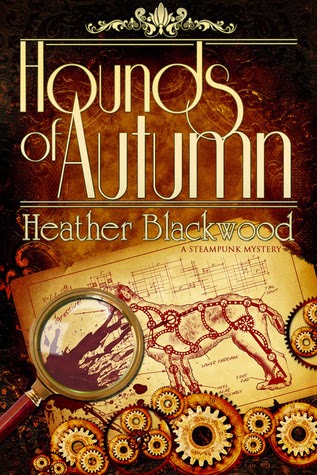 It is 1890, and the windswept moors hold dark secrets. Chloe Sullivan is an amateur inventor whose holiday takes a dark turn when her friend and colleague, one of the few female mechanical experts in the British Empire, is murdered.

A black mechanical hound roams the moors, but could it have killed a woman? And what secrets are concealed within the dark family manor? Accompanied by her naturalist husband and clockwork cat, Chloe is determined to see her friend's killer found.

But some secrets have a terrible cost.
******************
Since watching the classic 1939 version of The Hound of the Baskervilles (Sherlock Holmes), I’ve been a big fan of Dartmoor, and the mysterious Grimpen Mire. What a great atmosphere for mystery novels.

Hounds of Autumn takes place near the town of Farnbridge (near Dartmoor), and was listed as a steampunk, so I wanted to read it right away. Chloe and Ambrose, wife and husband, travel by airship to Farnbridge for a month to visit Ambrose’s family. Chloe is a devoted amateur inventor.

Chloe’s fellow inventor, Camille Granger, who she is planning to now meet, is found dead in the moor the day Chloe and Ambrose arrive. The local police put the blame on her mechanical (a mechanical hound that Camille created). I thought that was an interesting twist on the original Arthur Conan Doyle story.

We follow Chloe in her search for Camille’s killer, with Ambrose at her side. He is quite a bit older but they get along comfortably as Ambrose has his own research interests as a botanist. They respect and take care of each other’s sensibilities.

Blackwood writes in fairly basic steam punk elements. The mystery plot of the novel is equal in weight to this. We see the airship, then ‘mechanicals’ as they are called (servant type machines, and the hound as well as a few other small animals), and a steamcycle, but these elements do not overwhelm the story.

I like that Chloe is not a traditional female of her time and is much more interested in developing mechanicals than in traditional feminine pursuits. Nor does she hesitate to sneak into Camille’s rooms to root around and take some of her papers, or creep about the town at night when she wants to find out something. It’s also encouraging that Chloe’s relationship with her husband, Ambrose, is a comfortable one that suits both of them, and she is no less than him in their relationship dynamics.

We learn there are many secrets hidden among Ambrose’s well-off family members, and with ingenuity and bravery, Chloe gets to the bottom of them.

The plot moves well and though not as steam-punky as others in the genre, I really enjoyed this book as a more relaxing read. If you are looking for a mystery-style steam punk novel with a British country flavour, don’t hesitate to read this. I’m wondering if perhaps Chloe will solve another steam punk mystery?

Thank you to the author for a free Kindle download.
Posted by Kristin Un-Ravelle'd at 16:33