In Delphi, the mountain city deemed by the Greek gods to be the center of the Earth, a cult of neo-pagans re-create with painstaking authenticity ancient rituals to glorify the god Apollo and deliver oracles to seekers from around the world.

When antiquities are stolen from a museum in nearby Thebes, British archaeologist Sarah Weston and her American partner, Daniel Madigan, are drawn into a plot that goes beyond harmless role-playing: someone’s using the Delphian oracle as a smoke screen for an information exchange, with devastating consequences for the Western world.

Pitted against each other by the cult’s mastermind, Sarah and Daniel race against time and their own personal demons to uncover clues left behind by the ancients. Their mission: to find the original navel stone marked with a lost Pythagorean formula detailing the natural events that led to the collapse of the Minoan Empire. 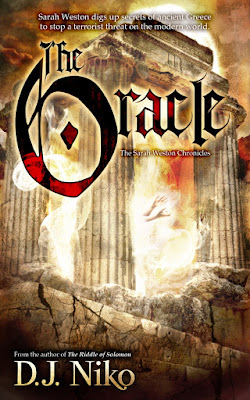 The Oracle is a fast-paced, well written novel about the nitty gritty and often treacherous world of antiquities black marketing, in relation to the ancient Oracle of Delphi.

D.J. Niko runs two timelines; that of Aristea, the last Oracle (or priestess) of Delphi, back in 393 CE, and Sarah Weston in modern day working on an important artifact related to the Oracle. I like Aristea’s story running along intermittently with the present as it gives us a window into the world where the sacred objects that garner so much interest now come from, and to see past and present action occurring in the same Greece location.

In modern day, the continuous action sequences of Sarah’s and Daniel’s pursuit and investigations on the obelisk stake make me a feel like I’m in a James Bond film as we also travel to different locales to uncover the mystery. There’s good flow and sense of urgency throughout and we are treated to military and Russian villains, and even Syrian IS. The oracular artifact is of great interest to these and other groups as it can give them enormous power.

I like Sarah as a strong female protagonist; she’s smart, and brave. As the story focuses more on the race to find out the truth about the artifact and why a mysterious group is after it, there’s not really enough room to develop a romance between Sarah and Daniel though there’s a thin subtext about it throughout. However, they do have a special and very solid connection.

The Oracle is based in the fabulous cultural heritage of Delphi and the author has obviously done a lot of research so there’s a certain amount of info relay. Niko writes some wonderful descriptions, but sometimes I felt the story a bit dry. I also found the type script technically is just large enough that you have to continuously keep scrolling the pages fast which kept my finger always on my mouse (or maybe I was anxious to see what’s happening next!). I really liked the secondary characters that add a lot to the story. 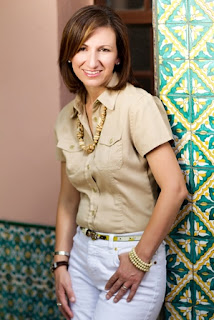 I definitely recommend The Oracle as a great read for those who love action-oriented novels with a flavour of ancient history, and linked directly into important issues of our times. 4.5 Stars!

The Oracle is D.J. Niko's third book in the Sarah Weston Chronicles, archaeological thrillers.  You will find her on the web at these links: