Once Upon A Stolen Time by Samreen Ahsan - Book Review 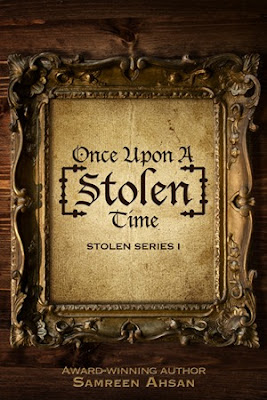 All her life, Myra Farrow has been obsessed with medieval castles, and the kings and princes who once inhabited them. Now, wealthy video game designer, Steve Bernard, wants her to model for a princess character in his new game. Myra can’t resist his offer, especially when she learns that Steve plans to film inside the mysterious Hue Castle, a cursed, barren, colourless place forbidden to visitors for centuries. But unknown to Myra, her soul is bound to Hue Castle by blood and sorcery. When she enters its doors, she awakens dark powers that will reach through time—stealing her past, torturing her present, and rewriting her future.

1415…
Edward Hue, the last of the Hue royal bloodline, has never stood in the sunshine or held a living flower. Cursed from birth to live in darkness and bring death to all he touches, he is at the mercy of his cruel, tyrannical father, who will not rest until he shatters Edward’s soul and makes his son into a diabolical copy of himself. Edward’s one hope is the mysterious woman who haunts his dreams—who will either break his curse and bring him out of the darkness, or destroy him utterly.

Myra finds herself accidentally engaged to Steve, a young game software developer from a wealthy family who wants to have her model for his new game that he plans to shoot at the reportedly haunted Hue Castle. They investigate the ancient castle and while exploring the totally grey and lifeless structure, Myra starts to pick up visions and premonitions from a screened mirror.

The author runs two timelines, one in 2015, and one in 1415, set in the same castle. Myra and Steve are in 2015, and in the past, prince Edward lives horribly oppressed at the hands of his very cruel father and King, yearning for the love of the woman who haunts his nightly dreams.

While the storyline is fascinating, the writing style is a mixture of youngish YA, and advanced vocabulary (can you guess what caliginosity means?), along with philosophical quotes between chapters. I caught one anachronism when King Stefan in 1415 taps his cigar ashes into an ashtray :)

The two male leads have interesting developmental changes. Steve completely changes his feelings for Myra from the start to end of the novel, though some of his evolution may be on account of a new revelation about him. Edward in 1415 appears to go in the reverse direction, from being hopeful to hopeless. Myra has a couple of important and perhaps scary revelations about herself that will definitely impact her in the next book.

Both past and present storylines are relayed from their respective POVs so we see things from Myra’s perspective, and then from Edward’s. The storylines are brought together at the cliff hanger ending but pose a new, possibly frightening, scenario for the next installment.

If you’re into cursed castles and love YA books, this novel is definitely worth checking out for the great atmosphere and inventive, haunting story. I think if Once Upon a (Stolen) Time was made into a film and shot with a lavish, classical hand, this would make an amazing movie.  4.3 Stars!

My thanks to the author for an advanced reading copy. Samreen Ahsan is the winner of many worldwide book festivals and you will find her on the web here: