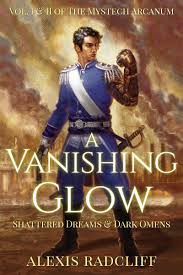 When the High Sovereign of the five kingdoms of Ghavarim is murdered by a mysterious assassin, the realm is plunged into chaos. Jason Tern, a noble captain with a tragic past, must battle shadowy assailants and untangle an ever-widening web of lies to discover the true identity of the killer before mounting tensions spark a bloody civil war. Meanwhile, Nilya Valsu, a talented army engineer with a broken heart, finds herself used as an unwitting pawn in a plot that has deadly consequences. Wracked by guilt, her sole chance for redemption lies with a man who would loathe her – but only if he knew her secret.

As the conflict intensifies between the magic-fueled technology of the West and the disaffected rebels of the East, all must fight for what they hold dear. Who will reign victorious and who will lie bloodied on the ground in the light of a vanishing glow?
---------------------------------------------------------
Alexis Radcliff’s first novel is a well written, intelligent, and complex foray into a fantasy world focused around the ancient city of Adaron. While her novel really defies genre definition, it has elements of adventure, magic, and tech/steampunk on the background of a ruling noble hierarchy somewhat akin to old European. One thing this book is not however is a romance novel.

We begin with Captain Jason Tern’s return from duty out on the savannah to Adaron to serve with friend, Nole Ryon, the future High Sovereign. Jason is likeable though has clear self-doubts stemming from his past.  At his first social gathering, he and the reader are plunged into Adaron politics, governmental and military, that underscore much of the story.

The author introduces original themes such as the mystech crystal (a blend of magic and machinery), and constructs (humans that have suffered bodily injuries that have been repaired with mechanical prostheses powered by mystech). The idea of East versus West marking increasing industrialization and the attendant problems this brings is also an important theme.

There are two expertly interwoven plotlines of Captain Tern’s investigations of the High Sovereign’s assassination, and that of Nilya, a young tech engineer who wants to improve her life. Her course is a peculiar one, in part influenced by the machinations going on in Adaron. Nilya comes to an emotional, and very interesting end.

Several unexpected and fantastic plot twists really kept me going. I wouldn’t normally read a book like this (political/military/adventure) but found myself enjoying the author’s smooth writing style and unexpected plot twists. Exciting ending as a lead into the next instalment.

A great read for those who enjoy adventure/thriller type novels set in a framework of magic, fantasy, and quasi steampunk.  4.3 stars!