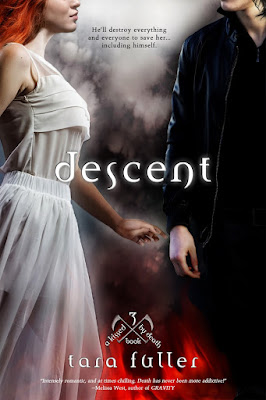 Easton doesn’t believe in love. He believes in Death. Darkness. Sin. As a reaper for Hell, it’s all he’s known for over 400 years. When he gets slapped with training the boss’ daughter, an angel who knows nothing but joy, he knows he’s in for a world of trouble.

When the dangers of Hell threaten Gwen, Easton will do whatever it takes to save her. But as the darkness closes in on them both, will he be able to save himself?
-------------------------------------------
I love this unusual scenario of Angel of Joy and Reaper for Hell! The pairing is very unlikely but Tara Fuller writes it in a believable way. It helps that angel Gwen has an unquenchable need to ‘fix’ Easton. I want to give this a 3.75 but there are some really sweet moments between Gwen and Easton so it has to be a 4.0.

Gwen is kind of an odd angel in that she wants to experience more than just her angelic joy. When one of her human charges accidentally gets taken to Hell, she’s determined to get him out. She’s foolishly, but outstandingly, brave in descending into the pits of Hell, but at least she picks the right guy to bring her there – Easton!

Easton is a cool guy/reaper and doesn’t take guff from anyone, though he’s a bit moody.  He even has a conscience about having to bring Gwen down into Hell, but he pretty much has no choice when Balthazar, Gwen’s father and Easton’s boss, commands him. I also think he punishes himself unnecessarily for his own past but then maybe it’s Gwen’s role to bring him out of it.

It's interesting that when they touch, part of their elemental natures (misery versus joy) seep into each other, starting to create a better balance.

The author rotates the POV between both Gwen and Easton, and I liked seeing what they’re both thinking. The growing attachment between them is well timed and sweet. Amazingly Easton is willing to endure hellish pain for Gwen, and she for him, showing their growing feelings for each other.

Their journey into Hell is well done with torturous misery at every turn, and various unsavoury characters.

Overall, I was still looking for a little more depth, but Descent is very entertaining and I think Easton will be the next book boyfriend hottie! Unexpected ending.

My favourite quote on Page 125:
“Your jokes are terrible,” he finally said.
I shrugged, resting my chin on my knees. “I like them.”
“So do I,” he said. “But then again, I’m kind of wired to enjoy terrible things.”

Tara Fuller writes novels of teen angst, and kissing. You will find her on the web here:
Descent, on Amazon, Available June 2, 2015
Tara Fuller's Website
Tara on Twitter

Thank you to Entangled Publishing for a NetGalley reading copy for the purposes of a review.
Posted by Kristin Un-Ravelle'd at 20:47