Hold Me Until Midnight, by Christina Phillips - Review 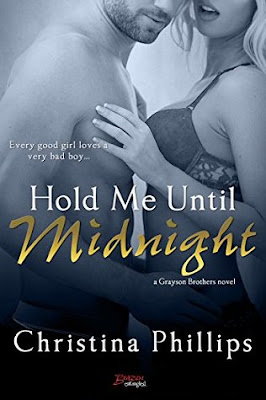 Scarlett Ashford needs a date for her father’s wedding. Only she doesn’t just need a guy in a suit – she needs a bodyguard. The only problem is that Jackson Grayson is big and gorgeous and way too sexy. So much so, that Scarlett’s tempted to let this hot bad boy ruin her oh-so-good reputation…

Jackson doesn’t do relationships and he certainly doesn’t sleep with clients. Yet he can’t fight their inconvenient attraction, or how badly he wants Scarlett’s warm and wicked curves against his body. He wants her. Now. Even if it’s just for one night, and if even walking away the next morning isn’t as easy as he thought.

Besides, one hot and incredibly intense night between a bad boy and a pampered princess could never turn into something real… could it?
-------------------------------------------------
Scarlett Ashford hires a sexy, tough security guy to take her to her politician father’s wedding as a tactic to put off unwanted male attention, but she gets a little more than she bargained for with Jackson Grayson. She and her bodyguard “date” are instantly sexually attracted to each other.

The action moves fast and Scarlett and Jackson are so attracted to each other that, despite their huge social differences, they hook up almost immediately.

I think because Scarlett has grown up in a wealthy family, she has learned to be ‘polite’ about difficult situations. Unfortunately this does her no favours.  Scarlett’s redeeming feature is that while she doesn’t like blatant confrontation, she has the sense to choose a guy/bodyguard who has no problem with it and the physical brawn to back it up. Jackson totally fits the bill.

And Scarlett is nice enough that even though she’s a society girl, she’s the type who would fall for a regular working guy. Overdone trope, though with a slight twist.

Scarlett and Jackson’s attraction continues and they start to find common ground in their personal interests and develop something more between them than just several hot sexual encounters. They are supportive of each other which is a very nice development.

I think Jackson is a salt-of-the-earth kind of guy who has overcome a tough start in life, and it’s funny at times to watch how he and Scarlett figure each other out as she’s at the opposite end of the spectrum.

While some elements of the story are endearing, overall I found the story thin on character development and the writing style fairly basic. As an Entangled, Brazen imprint, this book is definitely true to steamy novels and if you’re looking for same, Hold Me Until Midnight will satisfy.

I was given a copy of this book by Entangled Publishing, via NetGalley in order to provide an honest review.