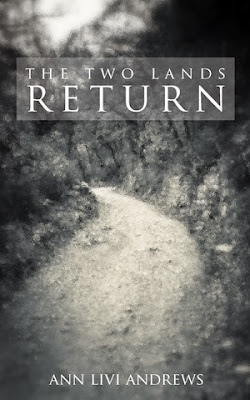 The Two Lands – Return, by Ann Livi Andrews
Genre: Fantasy
Pages:  425 PDF, 490 Print
Published By: Hollow Hallow Bindings, March 29, 2014
Source:  Author
“Once upon a time, there lived a beautiful princess…” But what if the princess is really plain, and no one wants her? Princess Keita may be the wisest princess in all The Two Lands, but it isn’t until a prince from across the sea arrives that she is mysteriously betrothed.

Princess Keita sets out on a journey with her new Prince to his homeland. Her journey begins to take an unexpected turn as she struggles between thinking of her betrothed, her father’s guard who escorted her into the hands of her Prince, and a dark wizard who speaks to her through dreams.

Princess Keita is plain but has abundant native intelligence, and has yet to get a marriage offer at the age of 16. Finally, Prince Jeremiah from across the treacherous sea comes seeking her hand as he has heard about her even in his far domain.

In some ways, this is like a parable. Princess Keita leaves her parents’ home to probably marry Prince Jeremiah, and comes to learn about the big outer world and her place in it. Although in Keita’s case it’s a magical world of wizards, dragons, other strange and dangerous creatures, and the unknown things that have brought the two lands to their current perilous condition.

I found Keita to be smart, sensible, and somewhat dispassionate. She just deals with everything that comes her way with her natural smarts and learning. Despite this, she is susceptible to the wizard’s power over her, especially after she overhears Jeremiah’s parents discuss why they want her to marry their son. I think King Abner has been remiss in teaching his son, Jeremiah, about many things and this does him no favours.

At 425 PDF pages, I worried that this would drag as it’s quite long. The book reads fluidly and well, though I still found it long (am getting reader’s attention deficit?). I think some areas could have been tightened up a bit, like some of the conversations which bring information but go on at length.

As this is a young person’s book, I also felt the cover is somewhat dull and could use some brighter images as that would attract readers to this wonderful story. I can see middle graders staying up into the wee hours wanting to find out what will happen next but think they need to have a clearer idea from the cover what great adventures await inside.

There is an exciting and quite unexpected ending!

Overall, Two Lands – Return is an easy reading great fantasy tale excellent for young readers. I love the female MC, and there is a great mix of other storybook characters to entertain readers.

My favourite quote,
(Prince Jeremiah) “What do we do?”
Abner looked back out the window. “Don’t tell the women.”

A reading copy of this book was given to me by the author in return for an honest review.