Siren’s Call, by Debbie Herbert
Published by:  Harlequin, June 1, 2015
Genre:  Paranormal Romance, Harlequin Nocturne
Pages: 297 Kindle
Source:  Njkinny Tours
-------------------------------------
Mermaid mythology meets Native American lore.
Lily Borsage is the ultimate siren; gorgeous, aloof and irresistible to all the men in Bayou La Siryna. All of them, that is, until Nashoba Bowman comes back to town. The Native American kid whose innocent first kiss Lily remembers fondly is now all grown up, hot as an Alabama summer, and immune to Lily’s charms. What self-respecting mermaid could resist finding out more?

But Nash has a dark history that puts any woman he loves in grave danger, and a heritage of power he isn’t ready to accept. And Lily has a secret that no mortal man can ever know. When a mysterious enemy starts menacing Lily, they will both have to risk everything and embrace their deepest destinies if they want to survive.

This is my favourite bit of Choctaw lore from Siren’s Call. Debbie Herbert uses fascinating southern Alabama bayou legends and shamanism as an evocative framework for her last installment in the Siren’s series about mermaids. This is my first mermaid book and I’m impressed with how the author blends the fantasy element of mermaids into a modern day life story telling.

The opening scene for Siren’s Call is initially quite hilarious. Lily has the siren’s voice, making her irresistible to all males… except to Nash, her childhood friend, who she bumps into, all grown up and hot, at the supermarket. It’s amusing to see her deal with rejection probably for the first time.

I found Lily to be a little immature through the early part of the book, but she comes around through middle-to-end as she and Nash struggle through some tough situations. Nash isn’t that interested in Lily right off and it’s different seeing Lily being more aggressive than she’s probably ever had to be with a guy.

Nash has returned to his home town on a job as a famous wildlife photographer, with assistant Opal in tow. Opal makes a good foil, being a bit geeky, to the Borsage sisters. I love how centred and earthy Nash is, and his great ability to connect with wildlife. He ties in with the shaman aspect in the book as his father, Sam, is a well-respected shaman who contributes to the plot. We also see Tia Henrietta, the local tarot card reader/psychic mamma for the town.

The author takes a chance revealing something early on in the story. I wasn’t sure how good a move this was, but I admit to liking being on the uptake as things happen and ultimately for me it didn’t take away anything from the story. There are a couple of treacherous sub-plots running through the book, some based on some past events in prior books in the series. These really add to the story.

The romantic element between Nash and Lily develops naturally, and I had really nice feel-good vibes about Nash and Lily as a couple as the book closes. And we learn something really interesting about Nash. This is a fabulous mermaid read, especially if you enjoy a southern locale. All the bayou lore has me dreaming about a steamy southern vacation there some day! 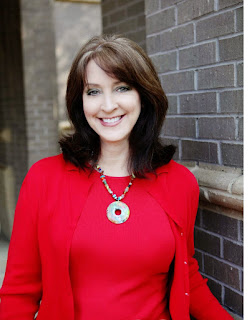 Debbie Herbert writes paranormal romance novels reflecting her belief that love, like magic, casts its own spell of enchantment. She's always been fascinated by magic, romance, and gothic stories. You will find Siren's Call, and Debbie on the web at these links:
Siren's Call Available on Amazon
Debbie's Website
Debbie on Twitter
Debbie at Goodreads
Debbie's Pinterest Page
Debbie is a past Maggie finalist in both Young Adult and Paranormal Romance, and she's a member of the Georgia Romance Writers of America.

I'm pleased to provide this review for Debbie Herbert and Njkinny Tours!
Posted by Kristin Un-Ravelle'd at 21:16