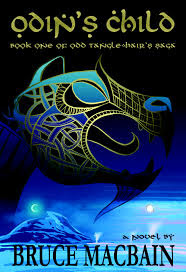 An old grudge erupts into violence as Odd Tangle-Hair refuses to back down from the men he believes shamed his father and betrayed their heritage by turning away from the old gods in favor of the White Christ. But when the violence escalates and Odd's family bears the brunt of it, he must leave his beloved Iceland behind and find his own way in the world.

The golden age of Viking conquest is fading when he takes to the seas, but this journey is full of adventures, and he meets priests and politicians as well as many unscrupulous men all too eager to take advantage of a young man abroad for the first time. Beautifully written, impeccably researched, and deeply rooted within the oral tradition of storytelling, Bruce MacBain has woven an evocative saga that will sweep readers into the past and plant them firmly in Odd's rapidly changing world.
------------------------------------------------
I really savoured reading Odin’s Child, and there is much to savour as it is a long book, rich with Icelandic and Norse cultural and historical details.

Odin’s Child is the story of Odd Thorvald, a 16 year old Icelandic boy, in AD 1029. From the outset, the coming of the White Christ (Christianity) into Iceland is contentious, causing deep divisions within families, and provoking existing feuds. A good portion of the book is with young Odd and his family at home, their lives, and the social structure of the time, and dealing with this change.

A revenge killing that becomes politically complicated sends young Odd (aka Tangle-Hair) into exile across the northern landscape from Iceland, eventually to the shores of Russia. With some help, Odd brazenly steals the ship of an enemy to escape, and becomes a Viking adventurer.

The tale is told through Odd and his companions’ sailing travels, detailing the people and customs of those they come across in their travels. These are fascinating, if not always happy events.

MacBain cleverly weaves in the history of the times into Odd’s experiences, from being in battle with King Olaf of Norway to his strange incarceration with the Finns where he is beset with characters from the Kalevala, the Finnish national epic. Odd is always clever and brave and scrapes through many a trial. When Odd reaches Russia, I was sad to see his story end as I’m very interested in Russian history and wanted to see what adventures he had there.

Odin’s Child is easy and clear reading, filled with cultural nuances that envelope the reader in Odd’s adventures and experiences. The sheer brutality of the times even seems naturally done, though it’s horrific to think that the way to revenge is through splitting your enemy’s skull in two with a hefty axe.

Because of the great attention to cultural and historical detail, I think this would make a great addition to any university’s Icelandic or Norse literature program.

To anyone interested in historical fiction centred on Icelandic and Norse traditions, this is not to be missed.

My thanks to the author and Blank Slate Press via NetGalley for a reading copy for the purposes of an unbiased review. Please visit Bruce MacBain at the following internet locations: