The Heiress of Linn Hagh, by Karen Charlton - Review 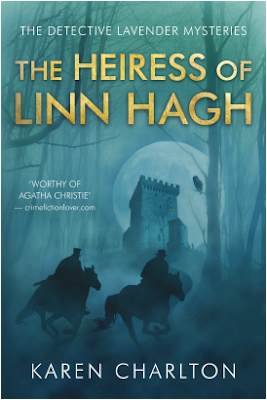 Northumberland, November 1809: A menacing figure stalks women through Hareshaw Woods and a beautiful young heiress disappears from her locked bedchamber at Linn Hagh. The townsfolk cry 'witchcraft' and the local constabulary are baffled.

Fearing for her safety, Helen Carnaby's worried uncle sends out for help from Bow Street magistrates' court in London. Detective Stephen Lavender and Constable Woods now face their toughest and most dangerous case. The servants and the local gypsies won't speak to them. Helen's siblings are sly and uncooperative, and the sullen local farmers are about to take the law into their own hands.

Isolated in this beautiful but remote community, Lavender and Woods find themselves trapped in the middle of a simmering feud and are alarmed to discover a sinister world of madness and violence lurking behind the heavy oak door of the ancient pele tower of Linn Hagh. Helen Carnaby's disappearance is to prove one of the most perplexing mysteries of Lavender's career..

Why did Helen flee on that wintry October night? How did she get out of her locked bedchamber? And where is she now?

The action begins somewhat sordidly in London, 1809, but soon we see Detective Lavender and Constable Woods traveling to Northumberland to solve the case of the mysteriously missing Helen Carnaby of Linn Hagh. Their long coach trip is plagued with attack by thieves but fortunately Lavender is quite astute and fellow traveler, beautiful Senora Morales, turns out to be a good hand with a pistol.

At Linn Hagh, Lavender and his side kick are confronted with the inexplicable disappearance of Helen Carnaby from behind her own locked and barred room door. As the detective and constable start their investigation, the reader starts to learn about the despicable Carnaby family, and various characters in the neighbourhood under suspicion. It’s interesting that the author owns up to being inspired to write the story on account of some of her own family’s ancestral legal documents.

Lavender and Woods make a very good team, and Lavender makes sure to leave Woods leeway in doing his work. They are both quite clever in how they gain the trust of the simple local people useful in figuring out the case. Woods is a wonderful character, and in fact has a greater warmth and expansiveness than Lavender’s reserved thoughtfulness. We could learn more about Lavender but I figure that will be coming out in future books.

Karen Charlton really brings us into the homes and lives of the people of 1809 Northumberland, with just the right touch of the speech of the times without overwhelming the reader, and various glimpses into society folk, church going, farmers, and gypsies or faws that are camped around the town. I felt like I had a really good look at what it must have been like in a small town in 1809. I was also interested to learn about the Pele Tower of Linn Hagh.

This is the first book in a promising series. If you like mysteries with an element of atmospheric moodiness, you will be delighted with this very enjoyable read. In the end, even the Spanish Senora gets a reward of her own!

Karen Charlton writes historical mystery and has published numerous short stories, articles, and reviews. She lives in the north of England and is writing the next Detective Lavender mystery for Thomas & Mercer.