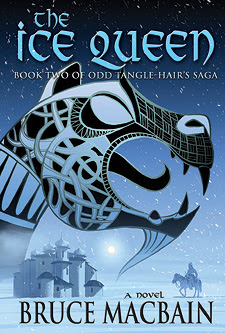 In this second volume of his saga, Odd Tangle-Hair travels to Russia to take up his post as skald to Harald, the young renegade prince of Norway.

Intrigue and danger await him when Odd finds himself 'caught between two wolves - the arrogant, bullying Harald, and his sworn enemy, Ingigerd, Grand Princess of Novgorod, who schemes against Harald by seducing Odd. While political intrigue swirls around him, a Pecheneg horde explodes across the steppe, and Odd must use his wits to rescue the besieged people of Kiev.
*********************************
I was eager to read of Odd Thorvald’s travels to ancient Rus as I’d had the chance to read book 1, Odin’s Child, which left off with Odd landing in Russia, and because I’m fascinated with Russian history and culture.

In The Ice Queen, Odd’s (aka Odd Tangle-Hair) journey takes him to early Novgorod and to the court of Prince Yaroslav and Princess Ingigerd. Odd is a sort of orator/scribe or court poet to prince Harald under whose protection he travels.

If you enjoy historical reads (especially in the first millennium, 1031) rich in cultural detail, this is your book. Odd has many adventures that illustrate life at court in Novgorod, social and religious customs, mythology, and of course politics and battles of the rough times, all written in an easy-reading style.

Interestingly, Ingigerd (who is of Swedish descent) takes Odd to be her lover but she’s very clever and we’re never really sure what she’s scheming. Intelligent women of the time I imagine felt oppressed and stifled with no real outlets for their abilities so I liked reading about Ingigerd’s machinations. She’s a strong female MC with some political power who plots with the best of them but is still very much a woman.

Odd is a friendly and likeable hero. His pitfalls of character make him very realistic. And we see him suffer the winds of fate as the tides run against and for him in turn.

The novel takes the reader through the early Russian landscape with Odd eventually getting embroiled in a mission to Miklagard, or Constantinople, to be continued in The Guardsman. So settle yourself in for a highly enjoyable sojourn through Bruce Macbain’s well researched and culturally detailed book. 4.5 Stars!

My thanks to the author and Blank Slate Press for a reading copy.
And a special thanks to my Russian and East European readers!

You will find Bruce Macbain at the following links: