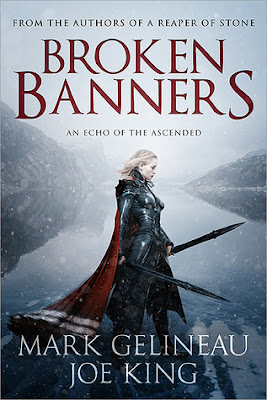 Slaughtered and left for the crows, soldiers of the King’s Army lay dead in a field. A grim reminder: the king’s law ends at the gates of the capital.

Elinor fought for what she believed and now she is an outcast. No soldier will follow her. No officer will stand with her. Yet when she finds her brothers and sisters slaughtered, she cannot turn her back on them.

Long ago, they swore an oath. Not to the king, but to each other.

This is Part 2 in the A Reaper of Stone series, which in turn is a series in the Echoes of the Ascended parent series. I was keen to read Broken Banners partly because I’m fascinated by current popular medieval, historical/fantasies (GoT, Last Kingdom) and so my thanks to the authors for a PDF reading copy.

Lieutenant Aldis Janen of the King’s 95th wrangles a dubious military commission to Heights Ward Keep via the keep’s chamberlain in order to help pay off some debts (Aldis makes for a good flawed character).

Elinor, also a lieutenant of the King’s army, has just come out of some sort of debacle from Timberline. Still, she has Conbert and his group of engineers, and they too are headed to Height’s Ward Keep to transfer to the 95th.

But there is a change sweeping through the realm of Aedaron and brutal events are afoot.

This novella is largely a brilliant battle foray by Elinor against Garett, the banished son who has overtaken the keep. I really liked Elinor as the strong, kick-ass female MC though there seems to be something supernatural about her battle skills.  In the previous book she gave an oath to “a spirit of the old age” so perhaps this is the source.

There are also fighters known as Razors that also have dangerous super abilities.

Overall, this is concisely written and has interesting characters. Because Book 1 (A Reaper of Stone) is also a novella, I think this series will make a better compilation volume when part three is completed and hopefully they will be combined. It would also benefit from more description of the environment and the characters themselves. Broken Banners is great on battle strategies and corrupt officialdom but, at least in this segment, there is no romance to speak of (a hint perhaps).  I really love at least a modest subplot of romance and feel this would help round things out.

I would recommend this novella to readers who are keen on the above mentioned qualities, and to check out the completed series as it promises to be very good. Awesome book cover. 4.3 Stars!

The end of this novella also gives perhaps too much in the way of previews of other books in the series, and some promo reviews. You will find Mark Gelineau and Joe King as the writer duo GelineauAndKing at these links: