Fated for Sanchez by Kristin Ravelle 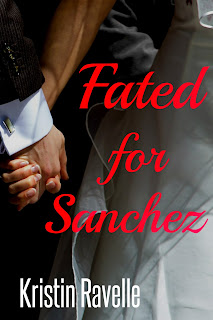 Fated for Sanchez
by Kristin Ravelle
Genre:  Contemporary Romance, International
Published:  March 10, 2016  Amazon
Word Count:  42,213
*****************
Lilli Eden has never forgotten the summer she spent in Malaga, Spain, at her friend, Jimena’s. Or Sanchez Varellano, Jimena’s brother. They shared smouldering glances all that summer but nothing more for Sanchez was engaged. Or so she thought.

Four years on Lilli feels she’s finally grown past their searing mutual attraction but upon gaining control of her parents’ trust fund, she discovers her deceased Uncle Jeremy had secretly invested it in a Varellano business expansion. Sanchez now holds the strings to her and her younger sister Lucie’s futures for several years.

Sanchez dares to take fate into his own hands. He can redress both Jeremy’s ill thought out offer and an old Varellano family score at the same time. And Sanchez has a private agenda of his own for the ravishing Lilli.

Lilli must decide whether to tempt fate on a chance with Sanchez for dreamt of futures for her and Lucie as the Edens and Varellano share a painful history that brings Lilli and Sanchez together but also threatens to drive them apart. Will fate be on the side of their love this time?

I'm excited to release my newest, Fated for Sanchez! This originally began as a Harlequin-style project that got pushed to the side for a while. But then it began to call out to me again when I began self-publishing. I've had the opportunity of staying in Barcelona, Spain for a time and even travelled up to Ripoll, a small mountain town in the Pyrenees mountains. I loved it. I didn't get down to Seville or Malaga in the south so instead made Andalucia a focus for my romantic tale.


A central theme in the book is the idea of fate.  Sometimes things just seem to happen in our lives without rhyme or reason, sometimes good, sometimes not so good. Why? Probably the more important element is how do we respond? Sanchez Varellano is definitely a man who wants to control what fate delivers, in this case the beautiful Lilli Eden. They have an unfinished past and new circumstances open the door for Sanchez. Check out Fated for Sanchez at the links below!