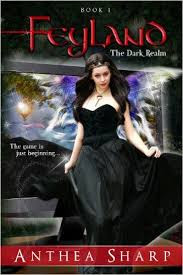 What if a high-tech computer game was a gateway to the dangerous Realm of Faerie?

Feyland is the most immersive computer game ever designed, and Jennet Carter is the first to play the prototype. But she doesn’t suspect the virtual world is close enough to touch — or that she’ll be battling for her life against the Dark Queen of the faeries.

Tam Linn is the perfect hero — in-game. Too bad the rest of his life is seriously flawed. The last thing he needs is rich-girl Jennet prying into his secrets, insisting he’s the only one who can help her.

Together, Jennet and Tam enter the Dark Realm of Feyland, only to discover that the entire human world is in danger. Pushed to the limit of their abilities, they must defeat the Dark Queen… before it’s too late.
--------------------------------
This is really a neat book. Written in a succinct, just-enough-of-everything writing style, it had me racing through it. If you’re a gamer and can’t get enough, you need to read The Dark Realm. If you like fey, paranormal, magic novels, pick this up.

When I read the description for The Dark Realm, I loved the idea of crossing magical barriers. I’m not a gamer, but I read exactly for this reason; escapism.

We begin with Jennet’s final game fight with the fey Dark Queen. Jennet loses and the queen takes something from her that she will need a champion to retrieve. And she needs it back in order to survive in the real world.

Then Jennet moves with her dad to a new town. She’s really hoping she’ll find a gamer champion at the new school she is to attend. She finds Tam. I like that Tam is curious about the VirtuMax company but he’s not at all into getting the wrist implant that those who are well-off have. He also deals realistically and calmly with his complex life issues but is open to new possibilities that intrigue him as well.

As Jennet and Tam start Feyland, the game begins to bleed through into real life. Vice versa, some elements of the real world cross into the game. I wonder how many gamers are looking for this experience!

I loved Marny as a supporting character. She’s a little outside of the mainstream but has a great sense of herself and is good with it. I didn’t get a good feel for was Tam’s brother, Peter (Bug); his looks or exact problem.

I like that the author uses gaming as a way to cross social class. Jennet’s main priority is finding a talented gamer who then turns out to be a decent guy. She doesn’t let the fact that he’s from another social class stand in the way.

This novel has roots in the Ballad of Tam Lin (Scottish Borders) written by Francis James Child (1882-1898).

Nice ending without a cliff hanger, though there’s an opening for book 2. Overall, a neat fast read though not particularly complex. The author might have made more of the threat to all humanity.

4.0 Stars!
Thank you to Anthea Sharp for the free day on Amazon. You'll find her on the web here: