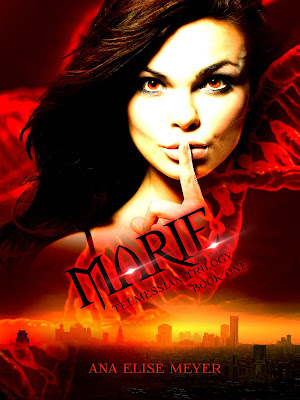 The human search for a solution to disease and physical decay has driven many to go to extreme measures. Dr. Carl Stanley’s efforts are no exception, his creation, Marie becomes the picture of physical perfection; possessing the ability to heal at a rapid rate. She has been groomed from infancy to apply her gifts in the service of war. However even a woman given all the physical gifts in the world is not immune to pain and suffering. One can only be pushed so far before pushing back. Can they handle what they have created....Can she?

The beginning is a bit slow as everyone grows up in an endless and brutal regimentation of training and medication in the facility. Eventually something very unexpected occurs and Marie escapes with one of the boys. Some great plot twists lead to Marie’s development into a ruthless killer of evil characters.

This is the first book in the trilogy; still, I was expecting to learn a bit more about the secret biology of her self-healing. I gather this will be expanded upon in the following books but it would have been good to give the reader something in book 1 which ends up being mostly cut-throat action.

Lots of action through the second half of the book as we follow Marie and company implant, Tyler, on her satisfying crusade of revenge. Marie is incredibly clever, and just as cold and ruthless, but she does have a heart against all odds of the experimentation done on her. The ending is very unexpected!

Overall I found the writing style fast paced and I think it will resonate with younger readers more. I found the speech of the members of The Company that run and own the medical facility somewhat immature. They’re brilliant and evil scientists but to me their speech came across as if they were 19 year olds. As well, a writer doesn’t have to use the f*** word frequently to make characters appear tough. Finally, some editing to clean up odds and ends would have been helpful.

So, I thought this very interesting premise which would actually make a great action-thriller movie, but I felt the writing style needs a bit more thought and polishing to bring out the best in such a thought-provoking premise as this one. Great cover.

My thanks to the author for a reading copy for the purposes of an unbiased review. 3.7 Stars!

You will find Ana Elise Meyer on the web at the links below. The second book in the series, James, is also now available.
Amazon | Twitter | Author Blog | Goodreads
Posted by Kristin Un-Ravelle'd at 16:41