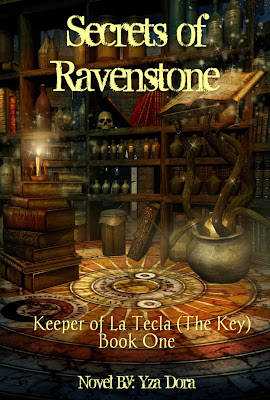 Yzavela thought her life would be simple. But that was over rated.

A panic arises in the Great City of 2025 London caused by a takeover in Parliament. Yzavela and her mother escape with their pets by train and find themselves in the end-of-the-line town of White-haven. A woman on the train has predicted their futures, and directs them to a mysterious realtor in town who somehow knows that they must journey further to an unknown destination.

Mother and daughter endure a bumpy coach ride through a strange, lingering fog which seems to have a mind of its own. Along the way, Yzavela remembers other strangers she has met, like the peculiar gentleman in the book store.

They arrive at castle Ravenstone, a compound walled off by a black slate Morder-looking wall where supernatural and paranormal beings dwell together.

It is at Ravenstone that Yzavela learns the truth about the man in the book store, and how her unexpected future is linked to his, and to Ravenstone. Through tests of strength and courage she must prove herself worthy of her surprising destiny.

Set in 2025, Yazavela and her mother escape the Great City of London after a terrible takeover of the city. They meet a mysterious stranger along their train ride out of the city who foretells their futures. Then Yzavela, her mom and their pets, find themselves ultimately guided to an 18th century gothic castle called Ravenstone. Supernatural beings, humans, witches, warlocks, and vampires all strive to live together in harmony at Ravenstone under the guardianship of the mysterious M.C.

I love Yzavela as a strong-minded young female lead character who is not afraid to speak up for herself. She’s quite a character actually, and is also incredibly kind. She also has lots of sass and displays it in a charming, youthful way.

The book is themed on disparate paranormal beings learning to live and function together in the spirit of cooperative harmony; very commendable. The story is a grand adventure as Yzavela experiences challenges in coping with these beings and other learning challenges given her by M.C.

This book is an inexplicable magical hodge podge that you just want to keep reading because it’s so delicious that you don’t even notice some paragraphs are ½ page long!  I couldn’t help laughing in delight at Yzavela reading up on the background of vampires with descriptions resembling arcane grocery list descriptions of their feeding habits, natures, and abilities, etc.

The authors pay a lot of attention to details, filling out scenes with curious information that seems fitting somehow; for example, the specific dimensions of things like books, castle rooms, etc., which I admit to not understanding the meaning of in the least!

I think the book would benefit from some minor editing. The authors are very enthusiastic but I felt they put in just too many magical elements. For example, towards the end shadowy human spirits attack Ravenstone. These made me think of Harry Potter death eaters right away and I think the story would have been better without. Marginal steam punk elements are also thrown into the mix but I think the story would be fine without.

My favourite quote, Page 107  “Just like everything else, they’re evolving.”

At the end is a sneak peek into the Boar-Wolves of the next book.

I wholeheartedly recommend this amazing series especially to Middle Grade and Young Adult readers who love paranormal adventure, and certainly to all young-at-heart readers.

My thanks to the author for a free reading copy in exchange for an unbiased review.
Amazon|Goodreads|Website|Twitter