The Whisperer, by A. Ireland King - Review 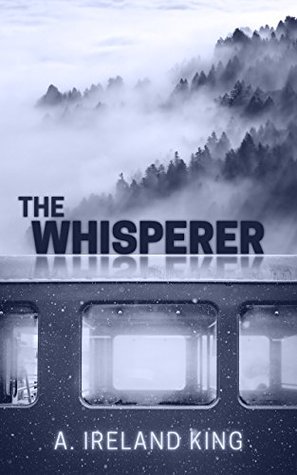 She chose death.
She got life.
When Meredith Potts jumps in front of a train, the first surprise is that she still exists.  She meets the mysterious Michael, a guardian angel of sorts. As Meredith learns to help the living in quiet ways, she must also face her own demons.
Events are now in motion that will uncover a terrible secret and expose a killer. Where will Meredith’s unplanned journey lead? Can the truth really set you free?
Set in Scotland’s capital city, this gripping tale of treachery and redemption is ultimately optimistic. Prepare to be swept away by authentic characters—The Whisperer will keep you guessing and leave you warm and fuzzy.
*********************************
Welcome readers, back to a book review today with a look at The Whisperer, debut novel by A. Ireland King, an indie author from Scotland getting started in this crazy challenging world of self-publishing.

A. Ireland's novel sounded intriguing in that we the reader are going to get a take from the other side of the veil after a suicide and maybe learn what pain had led someone to take such drastic steps. It also sounded from the blurb like there was a mystery being solved from the other side. I love reading stories set in far off places too, earthbound and fantasy, so the Edinburgh, Scotland setting cinched it for me.

The story begins on the tracks, the train tracks to be precise, where Meredith gives up the ghost.

She is surprised to find she’s suddenly and unexpectedly still ‘around’ in some new form and then meets Michael, another being on this plane who tries to help her understand her new found mobility and possible purpose. Meredith discovers she can hang around with anyone, former family, even people she didn’t know, though of course they can’t see her. If I could hang around with those who couldn’t see me or know I was in ear shot, I’d definitely learn some interesting things and so does Meredith, both good and not so good. These things begin to shape her other-side mentality in a new direction so she’s actually growing as a character after death.

The author has a direct, easy flowing writing style that speeds you along several different story lines, some connected to Meredith in some way, and a simple easy way of drawing you into their lives, thoughts and emotions. We learn more about Meredith through her/and omniscient observation of the living she left behind (great show not tell). You feel for Meredith in the way that life is just tough but also that she could have been more communicative, braver in her discourse with others while still alive and that might have helped her. Maybe this is a message for the rest of us.

On one level however I find these concurrent stories somewhat depressing. Admittedly I read mostly paranormal fantasy in order to escape from the ‘life is tough’ thing (have enough of that every day in reality). While the stories in A. King’s novel are interesting, heart felt, and ultimately warming with an essentially positive and encouraging undertone, reading the struggles the various characters work through (or not) was a bit of a downer for me.

The story gathers steam as the murder investigation gets underway and from this point I read through to the end in one sitting wanting to find out the truth. The end reveal is a really great twist and I loved the unexpected and uplifting ending.

If you enjoy reading stories involving the human condition and trying to understand how to better the lives of those around us and thus our own, don't hesitate to pick up The Whisperer. 4.5 stars for a very good debut novel!

Why do we sometimes get ideas from nowhere to do things, to take unexpected actions we didn’t think we would? Maybe it’s a whisperer …

My thanks to the author, A. Ireland King, for a reading copy in exchange for an unbiased review. You will find her on the internet at the links below:
Grab your copy at Amazon
Author Website | Twitter | Fb
Posted by Kristin Un-Ravelle'd at 17:04