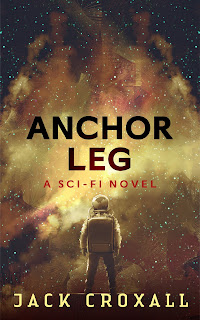 ‘I toss my knife out into space. It doesn’t matter, I’ll kill him with my bare hands.’

Humanity has spilled out into the solar system, into a succession of giant space stations known as the Relay. Seren Temples is a security apprentice running the Relay’s Anchor Leg. Her ship forced off course, sensors detect an automated distress signal. The ship responsible for the signal is a zero-G graveyard. Inside its vast hold, nothing but a single vial of frozen blood.

*********************************
I’m excited to be doing another review for Jack Croxall as I really like the warm human touches in his writing. Anchor Leg is a bit of a departure in that he’s branching into science fiction though he keeps his signature YA/NA focus. (And check out my spotlight review link for 6 Short Stories, one of the author’s earlier books.)

Jack Croxall writes his new novel from the female perspective, Seren Temples’ POV, which I think is unique and tough to do. I really like his take on Seren even though she gets a tiny bit on the androgynous side which probably has more to do with the science fiction/space setting for the book. Even so, the author is sensitive to feminine sensibilities and has put in the research on his heroine’s way of being. There is an LBGT angle and the author handles this very gently and fits Seren’s romance seamlessly into the story. So nicely done and I think will go easy with younger readers. I do feel like this take overall though is currently being kind of pushed through media and sometimes wonder how many authors are picking this up for that reason.

I really feel for Seren who has ‘escaped’ planet earth only to get caught up in a dangerous situation developing around one of the outer planets where her mining spaceship, Charybdis, is traveling through. For a 17-year-old she keeps a very cool head when sudden important responsibilities are thrust upon her, moving her up from apprentice level and things start to go crazy.

Anchor Leg reads a bit like Star Trek mixed in with some Sherlock Holmes sleuthing stuff. Interestingly, the names of the two spaceships, Scylla and Charybdis, are two ancient Greek mythology sea monsters that guarded a narrow sea strait and brave passers would inevitably get caught by one or the other. So too, Seren and security teammates shuttle between the same-named spaceships as time runs out on figuring things out. Good pacing with fast-paced ending keep the reader wanting to turn the pages.

I would have liked to know a little more about the bad situation on earth and maybe some more of that history through Seren as additional background to the story.
YA and NA science fiction readers will whip through Anchor Leg and those who really like relationship feel-y stories in other genres should branch out and give this sci-fi a try. You’ll love it.  4.5 stars!